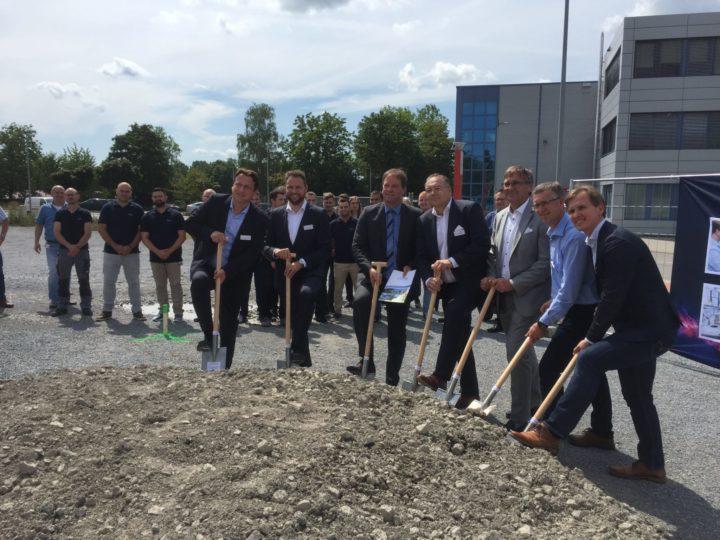 Valmet Automotive is investing around seven million Euros in the construction of its new Battery Test Center at Bad Friedrichshall. With this location the company massively expands its test options for its own group as well as service provider for the automotive industry. New ways are also involved in the realization of the building. As a result, the full test capacity will be available as early as February 2020. It is a unique test facility in the region of Heilbronn.

At the groundbreaking ceremony now (August 8.) in the presence of Timo Frey, town major of Bad Friedrichshall, Olaf Bongwald, CEO of Valmet Automotive Group, described the Battery Test Center (BTC) as a key factor to the company’s ambitions in electromobility. In the autumn of 2019, for example, Valmet Automotive is launching its first large-scale production for automotive batteries in Salo/Finland, in a former Nokia plant.

Together, the BTC delivers important test work for the battery factory, but also for the own development, which is done at Valmet Automotive. However, with the Battery Test Center Valmet Automotive does not just serve for the company’s own needs: “We appear on the market as a development partner for companies in the automotive industry. With our new Test Center we are expanding in the Industry much-needed test capacities for batteries and batterie systems of electric vehicles,“ emphasizes Dr. Robert Hentschel, Managing Director Valmet Automotive Engineering GmbH.

In order to be able to offer these additional test services in a timely manner, Valmet Automotive has broken new ground with testbed specialist AVL. So Valmet Automotive is expanding its existing battery testing capacities by adding four state-of-the-art AVL battery testbeds in container-based design. In comparison to traditional testbed engineering, the container-based design has the advantage of allowing testbed setup and pre-installation. This means in practice: during the past months, the container with dimensions of 15 meters in length, five meters in width an four meters in height each, were set-up and equipped at AVL in Graz to standards set by Valmet Automotive. Prepared in this way, the containers will be delivered in some weeks and built up on an area at Valmet Automotive in Bad Friedrichshall. By February 2020, the full test capacity will be available.

As Stefan Sommer, Director of Testing Valmet Automotive, showed in a presentation at the groundbreaking ceremony, the containers will be set up on an area of 1,500 square meters. Cells, modules and complete battery systems will be tested for environmental compatibility as well as function and safety.

The BTC is characterized in particular in the following points:

The Bad Friedrichshall location, which is within sight of the Audi plant Neckarsulm, has a long tradition for Valmet Automotive, albeit under changing names. The origin goes back to the beginning of the eighties with the founding of IVM Engineering. In 2007, the resulting IVM Automotive was taken over by Semcon AB, while its engineering division, with around 800 employees, was taken over by Valmet Automotive in 2017. In addition to testing and prototyping, the company also operates body and powertrain development as well as battery system development in Bad Friedrichshall: “The deep testing expertise at the site was a major reason to locate the Battery Test Center here,” says Dr. Robert Hentschel.

The Valmet Automotive Group is one of the largest vehicle contract manufacturers in the world, Tier 1 systems supplier to roof systems and a key development partner to the global automotive industry. In its strategic development, Valmet Automotive Group focuses on electromobility and battery systems. The activities in the group are divided into the four business lines: Manufacturing, Engineering, EV Systems and Roof & Kinematic Systems. Since its founding in 1968, Valmet Automotive has produced more than 1.4 Million vehicles at the Uusikaupunki, Finland plant. Currently, the Mercedes-Benz A-Class and the Mercedes-Benz GLC are manufactured at the plant. In 2018, 110.000 vehicles were manufactured, more than ever before in the company’s more than 50-year history. In Salo, near the Uusikaupunki plant, Valmet Automotive will open its first volume production of batteries for the automotive industry in autumn 2019. The company has around 6,000 employees at its locations in Finland, Germany, Poland and Spain (as at: 2018, Dec. 31). The largest shareholders in the Valmet Automotive Group are state-owned Finnish investment company Tesi and the Pontos Group, each with a stake of 38.46 percent. 23.08 percent is held by the Chinese Contemporary Amperes Technology Limited (CATL), the world’s leading manufacturer of batteries and battery cells for electric vehicles.