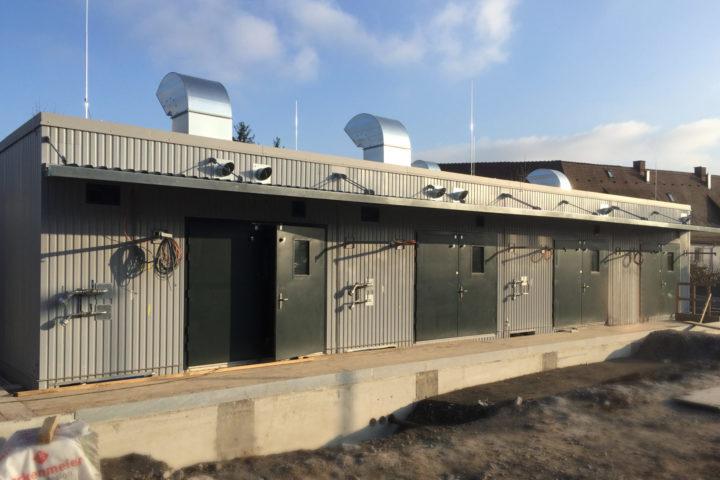 Due to the high demand for test capacities on battery modules and battery systems of electrically powered vehicles, Valmet Automotive is working with high pressure to set up its Battery Test Center (BTC) in Bad Friedrichshall, nearby city of Heilbronn. The facility should be operational by the end of February.

The construction of Valmet Automotive’s new Battery Test Center is well on the way. After the containers were delivered in a spectacular transport in November, the installation of the technical equipment from partner AVL had top priority for the past few weeks. Now technical infrastructure of VA is currently integrated. Afterwards the test runs of the complete systems are on the program.

The time pressure on the final preparation is high, because the team led by Stefan Sommer, Director Testing Valmet Automotive, wants to make the test capacities available as soon as possible. The test center should be operational by the end of February. That is also necessary: “Since we announced the new Battery Test Center, there has been strong demand from the automotive industry. We are in intensive negotiations and some customers would rather start today than tomorrow”, says Dr. Robert Hentschel, SVP Engineering.

The BTC has been set up on an area of around 1,500 square meters on the location of Valmet Automotive in Bad Friedrichshall. Cells, battery modules and complete battery systems will be tested for environmental compatibility as well as function and safety.

The BTC is characterized in particular in the following points:

The Valmet Automotive Group is one of the largest vehicle contract manufacturers in the world, Tier 1 systems supplier to roof systems and a key development partner to the global automotive industry. In its strategic development, Valmet Automotive Group focuses on electromobility and battery systems. The activities in the group are divided into the four business lines: Manufacturing, Engineering, EV Systems and Roof & Kinematic Systems. Since its founding in 1968, Valmet Automotive has produced more than 1.5 million vehicles at the Uusikaupunki, Finland plant. In 2018, 110,000 vehicles were manufactured, more than ever before in the company’s more than 50-year history. In Salo, near the Uusikaupunki plant, Valmet Automotive opened its first volume production of batteries for the automotive industry in autumn 2019. The company has locations in Finland, Germany, Poland and Spain. The largest shareholders in the Valmet Automotive Group are state-owned Finnish investment company Tesi and the Pontos Group, each with a stake of 38.46 percent. 23.08 percent is held by the Chinese Contemporary Amperex Technology Limited (CATL), the world’s leading manufacturer of batteries and battery cells for electric vehicles.